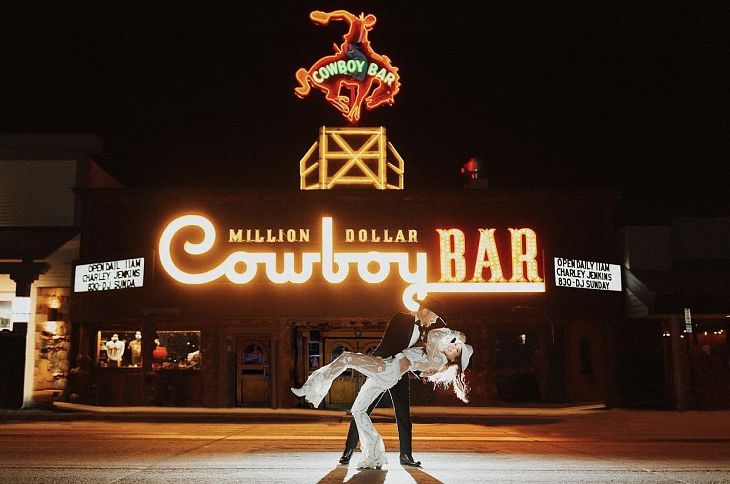 "Married in a Honky Tonk" is the title track of my sophomore album, out now! We had the BEST time shooting this music video at the Million Dollar Cowboy Bar in Jackson, WY. Everyone in this video is a resident of the town, and we couldn't be more proud or honored to have them be a part of it. A huge thank you to the Million Dollar Cowboy Bar for allowing us to shoot this video in your iconic space, and to Wyoming Whiskey for providing us with the classic longhorn Lincoln! Hope y'all enjoy!! --Jenny

Purchase/Save/Stream "Married in a Honky Tonk", The Album

Jenny Tolman has quickly become the country music darling of Jackson Hole. In less than two years, she’s sold-out headline shows at The Silver Dollar Showroom and The Cowboy Bar, been featured at The Million Dollar Music Fest and performed an original song on national television to honor local fallen Marine, Rylee McCollum. In the summer of 2021 she got engaged at Jenny Lake, and will soon be married here. On March 17th, Tolman will celebrate the release of her latest album, Married In A Honky Tonk, with a live band performance on the Cowboy’s iconic stage .

Born to a musical family and raised in the studios of Nashville, Tolman’s forthcoming project was produced by GRAMMY-nominated producer—and now fiancé—Dave Brainard. Her affinity for Jackson is on full-display on the cover photo as well as in the title music video, both of which were shot at The Cowboy Bar. In advance reviews, Married In A Honky Tonk, has already grabbed the attention of Billboard.com, which featured her alongside the likes of Maren Morris, Willie Nelson and Thomas Rhett. It builds on the praise she received from her debut album in 2019, which was included on numerous Best of 2019 lists, and debuted at #24 on Rolling Stone’s Top 40 list.

Rolling Stone has called Tolman one of the most “vivid and fascinating” artists to emerge on the recent music scene.  She has honed her stage show by performing around the country with superstars including ALABAMA, Toby Keith, Brantley Gilbert, Lee Ann Womack. And this year, she will tour coast-to-coast in support of the new album.