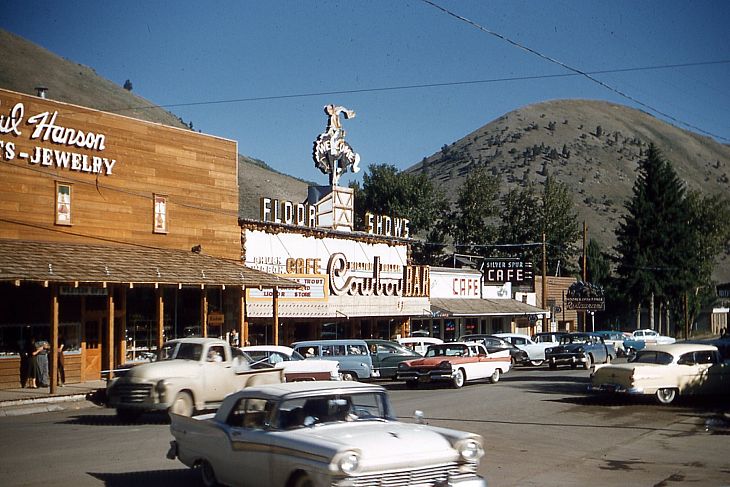 In May of 1938, Ruby hired Ben Goe to manage his saloon and on May 20, 1938, Joe Ruby signed over the deed to his saloon and land to Ben Goe but it wasn’t recorded with the town, until March 4, 1939, shortly before Goe re-opened it as "The Cowboy Bar". Ben aimed at recreating the essence of the cowboy. He opened his doors to anyone who was, or aspired to be, a cowboy in some fashion, and to those visitors who wanted to see the real thing. 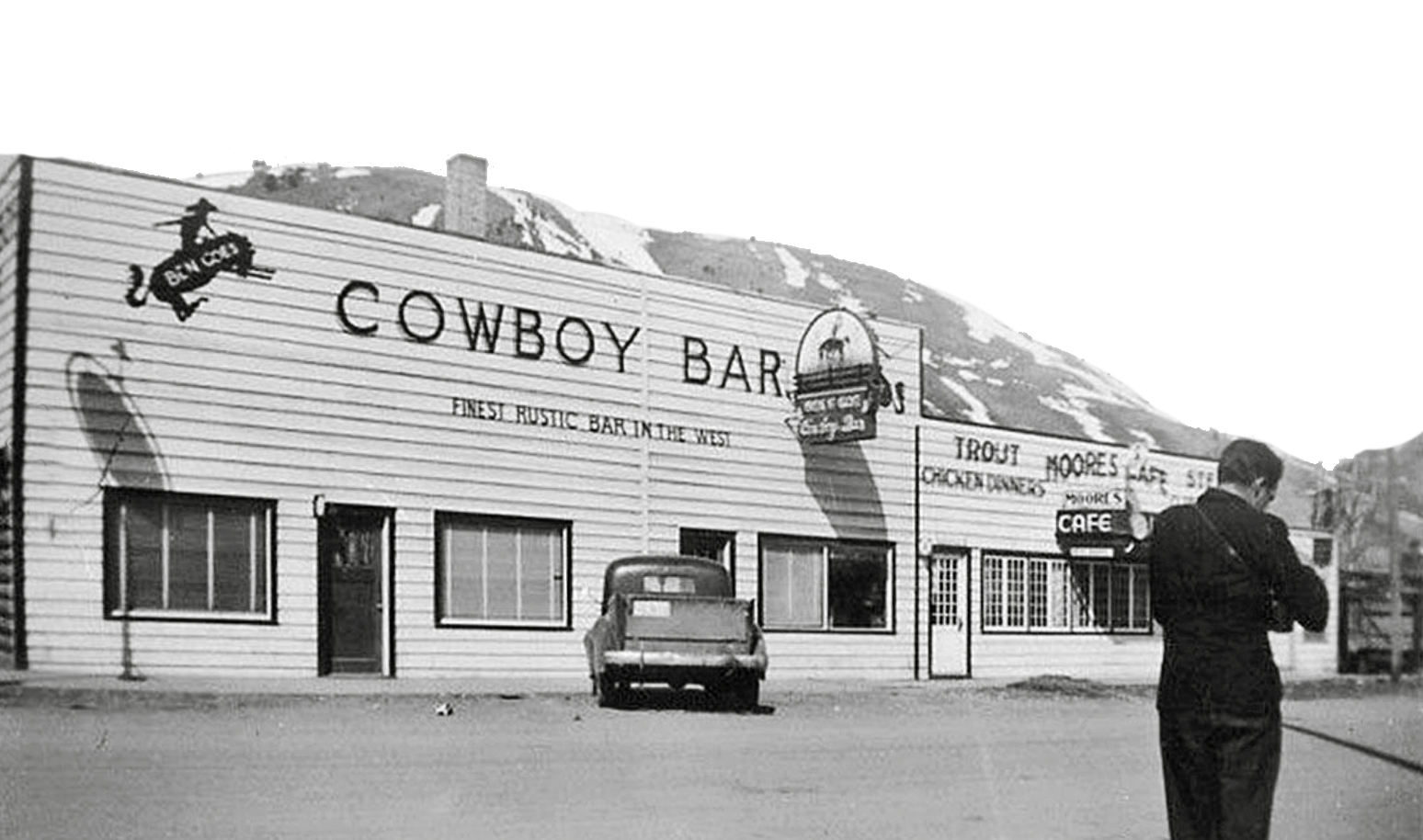 Gambling at The Cowboy Bar

Wyoming outlawed gambling in 1901 with the McGill Act, but no one paid much attention to the law. For one thing, gambling brought in a lot of money and had helped towns survive two world wars and the Great Depression. And, as with Prohibition in the 1920s, enforcement of the laws came from the state capitol in Cheyenne, over 400 miles and two days driving away. Local bar owners would hear of any attempt at a police raid in Jackson at least a day before it arrived.

If you walked into the Cowboy Bar in the mid-1940s, you’d never think that gambling was illegal. Roulette, craps, poker, and blackjack tables and slot machines filled the room. 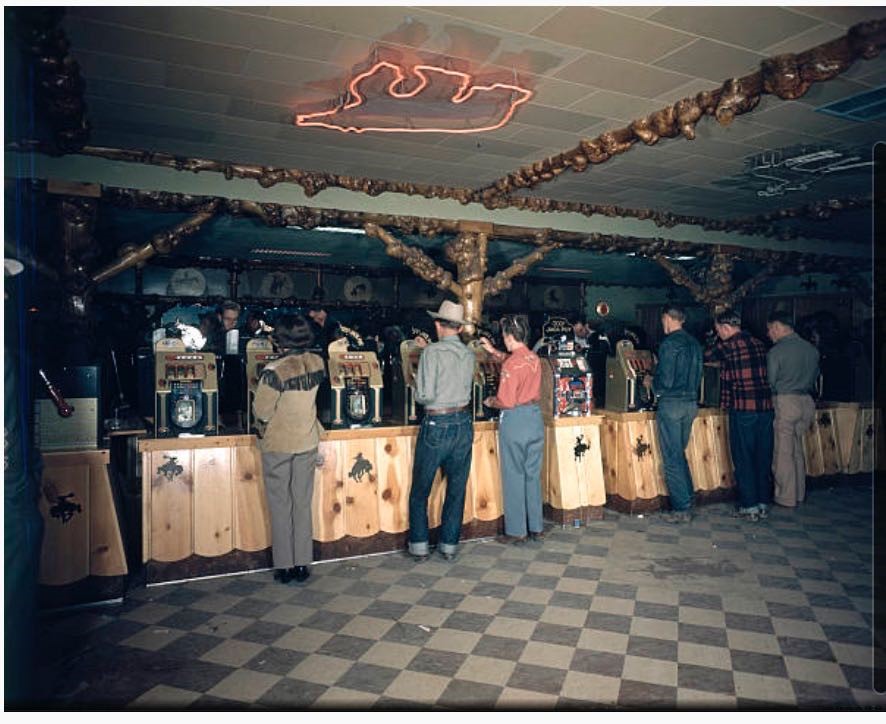 In the 1950's, the governor cracked down on gambling and the Cowboy Bar and others would hide their tables and slots behind false walls until the heat was off. Eventually, the Jackson town sheriff was removed from office for complacency and gambling came to an end. However, stories persisted for years of hidden gaming rooms with passwords and secret knocks.

Preston Parkinson had been managing a nightclub in Idaho Falls, when he bought the bar from Ben Goe. Press had also spent time in Las Vegas, and that’s where he seemed to get his inspiration for revamping the Cowboy. As soon as Parkinson took possession of the bar he overhauled the front with a portico of knobbled pine and neon advertising, neon-outlined animal heads, and the iconic bucking bronco spinning around on the roof, that still sits there today. 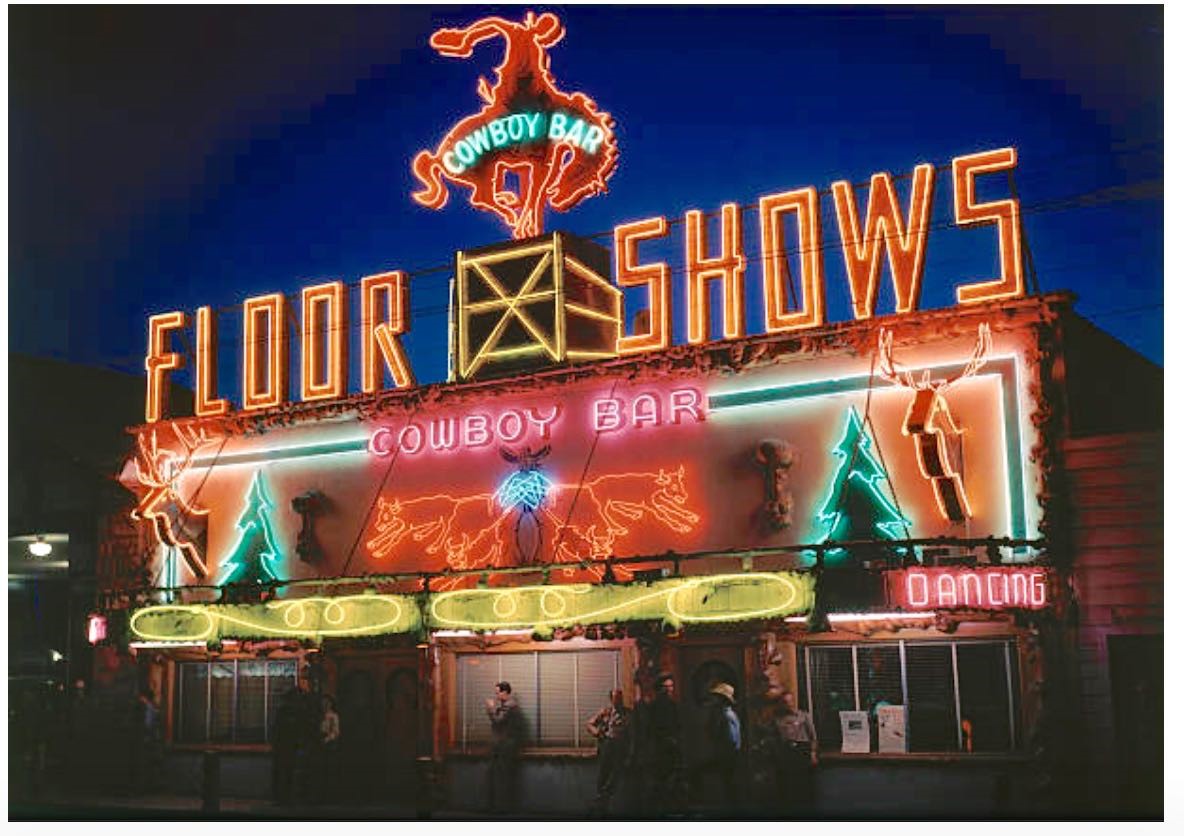 In 1953, The Cowboy Bar exploded in a ball of flames from a gas explosion in the basement. Luckily, there were no deaths but the damage was extensive. Press Parkinson, immediately started bringing the Cowboy Bar back to life. Most of his remodeling efforts still remain intact today. Outside, Parkinson replaced the "Floor Shows" neon sign with a new sign that read "Million Dollar Cowboy Bar". Parkinson insured his newly remodeled bar for one million dollars, and that nice round number inspired him.

On April 23, 1960, Jackson businessman, Homer Richards, purchased the Cowboy Bar as the trustee of an unnamed Wyoming corporation. It was during this time that the Jackson Town Council voted to ban all rotating or moving signs. So the spinning Cowboy and bronco atop of the bar was forced to stand still.

In 1973, CA Poindexter purchased the bar with one goal in mind- to bring world class Country Western acts to the stage. This started with Waylon Jennings in 1975, followed by Vince Gill, Asleep at the Wheel and then Willie Nelson in 1976. In addition to the music, CA Poindexter is also responsible for installing the genuine saddle bar stools in 1973. He purchased 20 saddles for the price of $97 a piece.

Everyone in Jackson referred to the new Cowboy owners as “the Texans” - Robert Walker, Clyde Lovingood, and Mel McClung. But the three men weren’t out to remake the Cowboy into a Texas saloon; they just wanted to maintain the tradition of good country music, good beverages, and the unique Cowboy Bar atmosphere. During this time, employees recall the occasional horse would come through the doors with its inebriated rider trying to keep it under control.

For the next 30 years the Cowboy Bar was owned and run by two couples, Art & Carol Andersen, and Roger & Hagan Dudley. During the 1980s, The Andersens and Dudleys embraced the large motorcycle groups that would pass through Jackson often. The Cowboy Bar became an official pit stop on the bikers’ annual ride to Sturgis, South Dakota, for their huge rally, both locals and tourists alike joined in. After thirty years of ownership, the Dudleys and Andersens sold the Cowboy Bar to the owner of the Wort Hotel, Bill Baxter.

The new owners, Bill Baxter and his family, made the same commitment to the Cowboy that they’d made in restoring the Wort Hotel and the Silver Dollar Bar.

Anyone who’s ever renovated or remodeled an older home has an appreciation for the kind of work it took to refresh the Cowboy Bar. Every layer peeled off revealed two more layers, and every cut wire led to three more. Imagine almost 80 years of additions, expansions, and remodels, throw in a couple small fires and a huge gas explosion, and you have an idea what was hidden in the Cowboy.

Once renovations were complete, the Cowboy Bar hosted a Grand Re-Opening celebration on May 24th, 2018. There were town council meetings to seek permission to fire up the rotating cowboy sign, banned from turning in 1972. The request was approved and when the switch was thrown for the "Grand Re-Opening" over 300 people jammed the streets to count down and toast the event.

Today, the Cowboy Bar is continuing to grow and earn it's title as one of the best live music entertainment venues. Since 2018, the Cowboy has welcomed Jo Dee Messina, The Bellamy Brothers, Midland, Asleep at the Wheel, Moe Bandy, Toby Keith, Lee Roy Parnell, Diamond Rio, Runaway June, The Oak Ridge Boys, Hank Williams, Jr. and Randy Owen to perform on their stage. In addition, to starting a Country Music Festival, The Million Dollar Music Fest.

A lot has changed over the years but one thing has remained the same- our commitment to the community. We look forward to the next 100 years with you all!